While I was at New York Comic Con mid-October, it was nice to come home after very long days to find packages of fabric waiting for me on the porch.

Among the goodies some additional Ghastlies prints (who can resist? well, I certainly can't!) Different colorways of prints I already had: 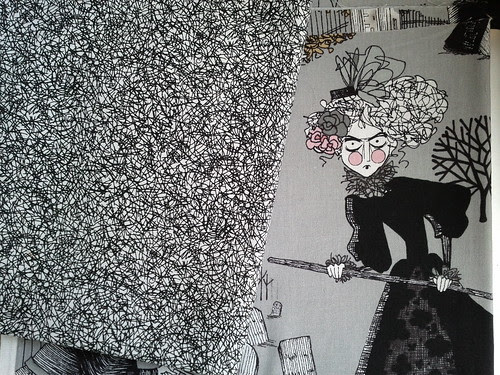 The Ghastlies in smoke, and Ghastly Bramble in natural/tea(?)

The Ghastlies I got because I still need to piece together a back for my Ghastly Taffy quilt. And because the Ghastlies are just amazing. I was happy to read the other day that Alexander Henry is bringing them back again, and adding another new print too. May 2012 is going to be fun! 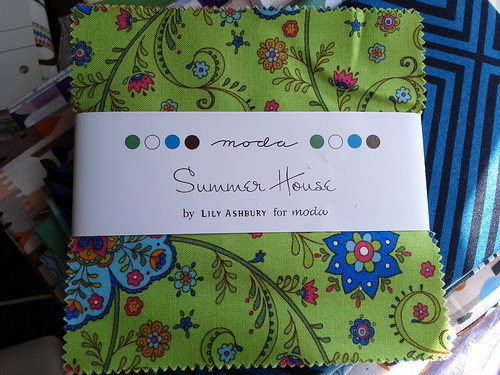 A charm pack of Summer House by Lily Ashbury.

I really love the vibrant, bright colors in this collection. I think the Audrey print in Bright Blue is probably my favorite one: 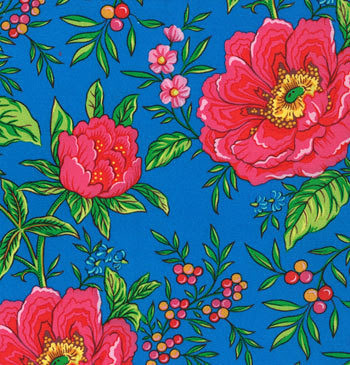 The vibrancy of this print gets me every time. Delicious.

I finally broke down and added to my Lizzy House collection by picking up 1001 Peeps: 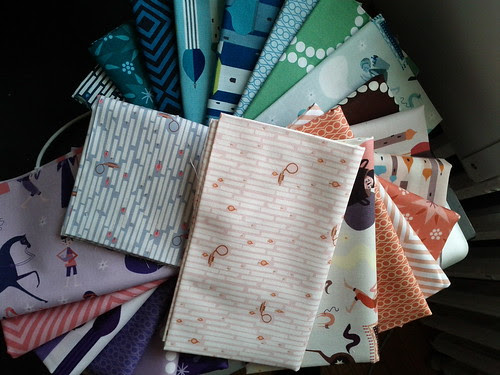 I think this may be my favorite print from that collection in my two favorite colors: 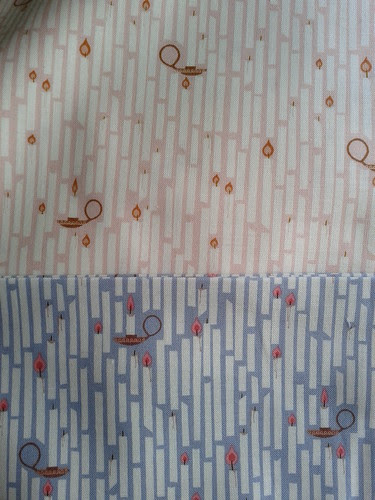 The candles are adorable!

And what is possibly my favorite print from Jessica Levitt's Kingdom line: 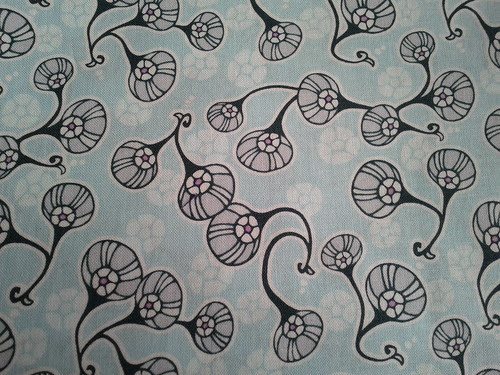 Posy in Opal. The light in this picture really doesn't do it justice.

And each colorway of my favorite Happy Mochi Yum Yum print: 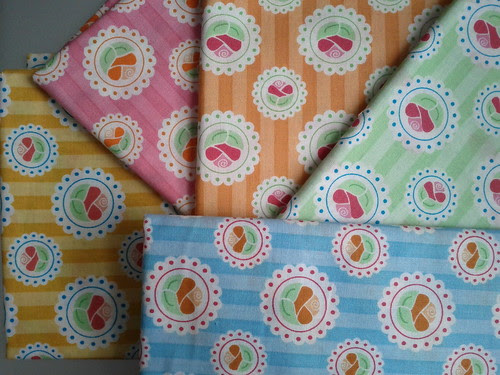 So cute and so colorful!

Now to clear more projects out of the way, and come up with things to do with this stuff!
Posted by Marieke at 11:28 AM 1 comment:

When they mentioned on the radio on Thursday or Friday last week that we might get a little snow, I figured it'd be a dusting, or an inch or so. Especially considering it was not yet Halloween, and snow is pretty rare to start before December here in NY (in my decade here at least), being that people start getting excited and hopeful that we might get some for Christmas. 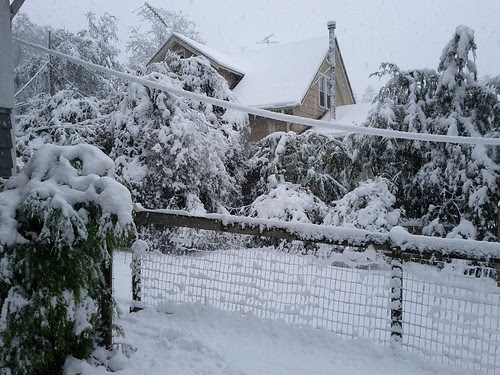 And so late in the morning on Saturday it started snowing. And then it starting coming down really heavily. At about 1pm, as Jeff and I were enjoying a lazy morning in pajamas playing on the computer, we heard a really loud noise, and suddenly the power went dead. A tree behind the house had uprooted and fallen right onto the power lines.

Most of the trees still have their foliage, and the snow was really wet and heavy, so this combination caused havoc all over the northeast. Tree branches, so heavily laden, were just snapping off. Trees were getting uprooted. It was pretty crazy. Jeff and I went out for a walk later in the evening after the snow had stopped, and you could hear the sounds of creaking, cracking, snapping wood all over the place, as branches lost the fight with the weight of so much snow and leaves. 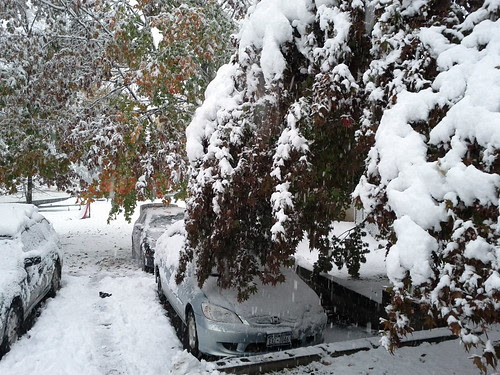 Heavy snow-laden branches bending down to the cars.

We were lucky though. If the tree had fallen straight over, which would have been what I'd expected, it would have crashed right on top of the house. This is a small house, and it was a tree that was at least 70 feet tall. Somehow, it fell right between our house and the one next door. It took out the lines coming in from the road, as well as the one from the pole to the house. 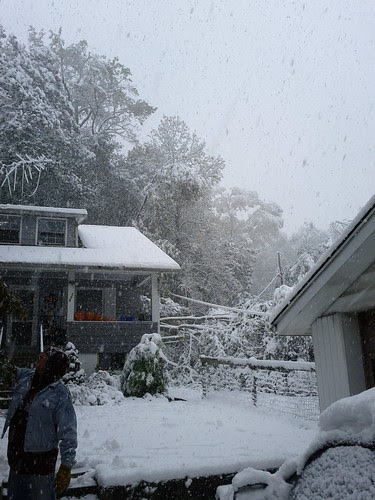 The tree in the yard on the side of the house. 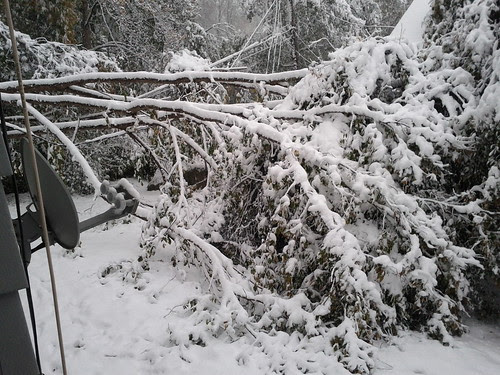 While we were lucky enough that the tree spared the house and "only" hit the power lines, this left the household dead in the water. While the heat is oil based, the furnace requires power to run the engine that circulates the hot water through the radiators. Our stove is electric, not gas (which I hate, but as renters we have no choice in the matter), so we weren't able to cook at all.

Our first evening was kind of fun and romantic. It felt a bit adventurous... a snowy white world, we still had residual heat in the house, and candles on everywhere. The snow did cancel our plans to head into NYC to go to a Halloween Ball, which we'd been looking forward to for months. It was even less fun when we woke up in the morning and the house was stone cold. Also much less fun was the realization that this was going to take a while to fix, and that the Halloween party we had planned for Sunday afternoon had to be canceled.

Jeff had taken comp time and had a long weekend to himself, which we would now end up spending without power and displaced. We roughed it a couple of nights at home, spent days with friends or finding other ways to kill time outside the house, and thankfully were able to spend the past 2 nights with friends and the ability to have hot showers! I spent the past 2.5 days just hanging out at Jeff's office, a refugee of sorts.

This morning (Thursday), I came to check on our cats, and found that our landlady had sent in contractors to start clearing the tree. Just as I left late in the morning, a convoy of National Grid trucks pulled into our street and stopped at the house. Hours later, we have heat and power and internet!

In quilt related news: I did finish hand stitching the binding onto Matilda's Olivia the Pig quilt, whilst killing time at Jeff's office... haha! And I had a few packages arrive also, some this week and some a week or 2 ago, so there will be a stash post soon.

Hopefully nobody else had such snow troubles!
Posted by Marieke at 3:34 PM No comments: