A few more pictures in somewhat better light yesterday morning, before this top too disappeared into a moving box... 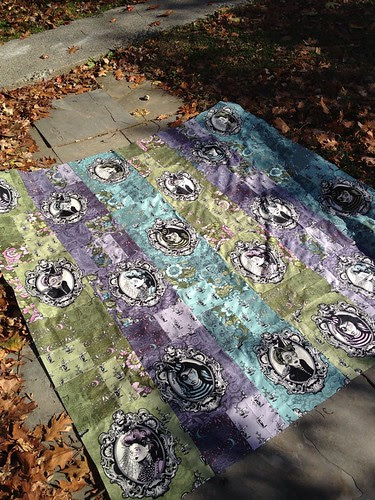 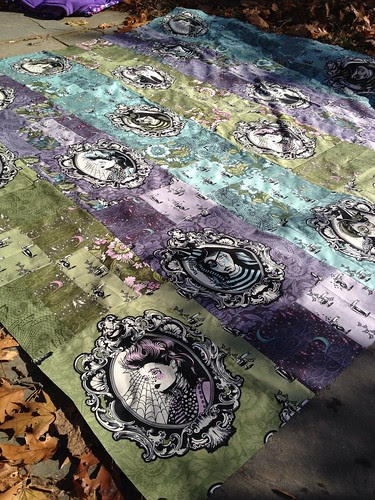 Now all my projects, supplies and tools are packed away, I feel all antsy. It's a bit strange as I can often go days or weeks without touching any project if I'm too tired or busy or distracted to work on anything, but as long as the option is there, I feel fine. Take away all those options, and I feel a bit uncomfortable. Whilst outside catching a little natural light for a few last pictures before things were packed away, Miss Matilda wanted to snap some too, focusing (or trying to) on the fabric that caught her fancy: the moons with the clouds: 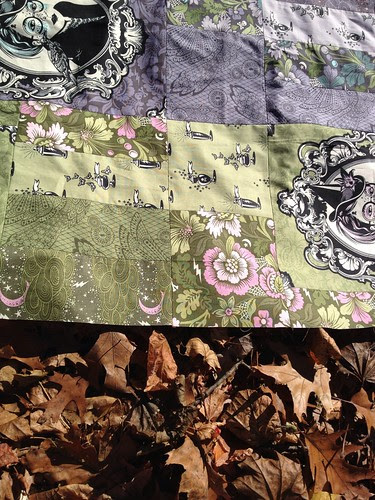 I just liked how she ended up framing the shot, with a chunk of leaves.
Posted by Marieke at 8:30 AM No comments:

Over the summer I finally finished my brother's quilt. This was the quilt I'd hoped to finish back in May to take with me when I visited, but sadly it didn't work out that way. I was unhappy with the random straight line quilting I was doing, and had to take all that out. I ended up running out of time to take it out and re-do it. 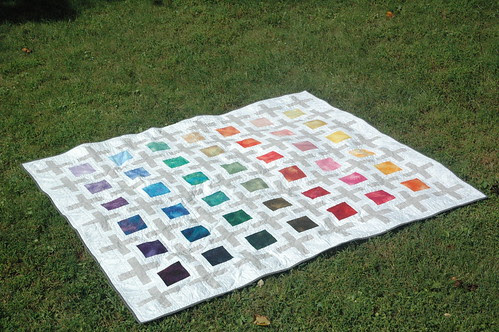 The pattern is based on How To Be Jenna's Dusty Springfield quilt (which she now sells a pattern for on her site!) I made mine larger and made it 6x7 colored squares rather than 5x6. I wanted to be a nice big quilt for a 6 foot guy to snuggle under, hence sizing up. At this size it'll also be a decent throw across the end of his bed too.

For the back I used a charcoal batik from Joann's with 2 more squares from the Benartex Fossil Fern charm pack. As my brother liked quilts that ran from warm to cool colors, I picked one of each. In the future if I go the route of (Joann's?) batik again, I will likely pre-wash the batik, or not forget the color catchers in the wash. I think it was the batik that bled through a bit and left some staining on the white on the front around the stitching. It wasn't hugely noticeable, but it was a rather devastating find, as I had wanted it to be amazing. The color catchers would likely have really helped. I quilted it with straight lines through the white between the color blocks and the crosses. 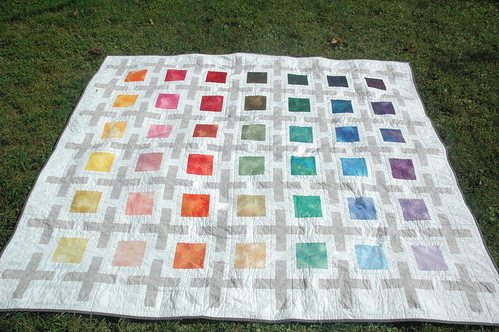 Besides the bleeding issues, I'm really happy with how this turned out. When my dad and step mom came to visit from the UK in October they took it back with them and will be giving it to my brother when they see him in December. I hope he loves it as much as we here all did, it was hard to let that one go!
Posted by Marieke at 10:22 PM No comments:

With about 12 minutes to spare, I managed to finish my Spellbound quilt using Tula Pink's Nightshade fabrics to be able to participate in the Sew Sweetness Tula Pink Sew Along! 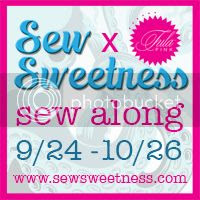 Things have been a bit chaotic here lately, especially as we're in the process of packing to move to a new apartment this upcoming weekend. The move was fairly short notice, so my plans to finish the Nightshade quilt before Halloween went out of the window. As did our Halloween plans, as Hurricane Sandy hit the area. We were extremely fortunate to miss out on damage and power outages (unlike last Halloween's snow storm), even as towns around us were hit much harder, including my kids' school district just miles down the street. Even as I packed away all my fabric, I left the Nightshade out, just in case I found some time to try and squeak in before the deadline of the sew-along. The pattern is the Spellbound pattern for the Nightshade fabric from Freespirit's website. It's an easy pattern to assemble, and I picked it because I liked the way it showcased the portraits nicely. The pictures aren't what I'd like, but at 11.48pm in a house overflowing with boxes and mess, the staging areas are lacking... 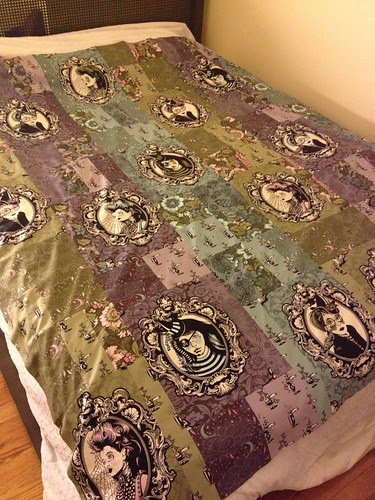 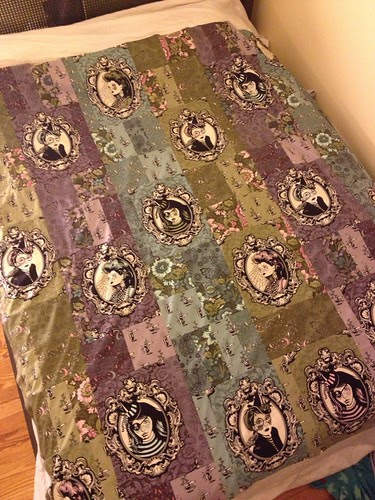 For the backing and binding I have a white-on-black pin/polka dot (Free Spirit Designer Beads) that I'll be using. I saw it used in a Nightshade quilt, I think the Snow Globe pattern, and decided it'd be a good fit. And so, my last quilt top in this house. Kind of strange...
Posted by Marieke at 12:09 AM 2 comments: