This morning I headed out to my local Joann's store to see if some of Denyse Schmidt's DS Quilts Aunt Edna collection had arrived. I saw it appear on Flickr or a blog, and figured it might be in stock. I was in luck, and some of it was! 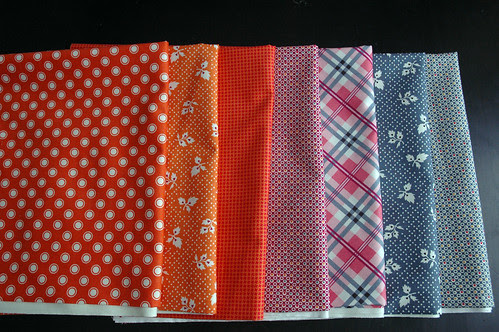 I'm missing 5 of the prints (the houndstooth, plaid and large dots from the second colorway, and a floral print from both), but as one of the bolts was one I spied behind the cutting table, still shrink-wrapped in plastic, the others may yet arrive or need to be unpacked. Because I forgot some of the notions for the Daisy Girl backpack pattern I have for Miss Matilda, I need to go back at some point anyway.

The new collection is lovely, and it matches the Hope Valley pieces I have well (I only have the New Day blue/grey colorway of that though, so far.) The oranges are a little less neon-y than in the picture, but the sun was blazing this afternoon and even the color correction in Photoshop couldn't fix it entirely. It's not hugely different though.
Posted by Marieke at 4:35 PM No comments:

Back in August, I was lucky enough to win 2 charm packs of Kate Spain's Terrain over on Melanie's blog, and a while ago I decided to indulge my love of whirligig pinwheels and make some. For this, I used the Charmed Whirligig tutorial over on the Turtle Hill Quilter blog. 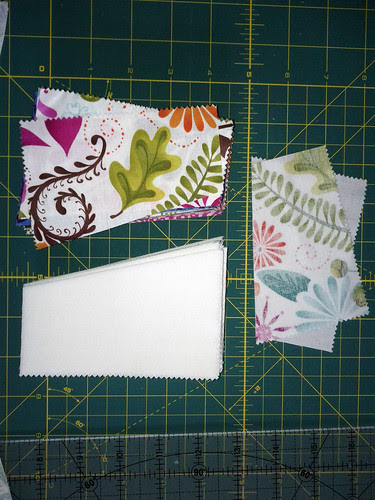 Now I have a stack of lovely colorful Whirligigs! 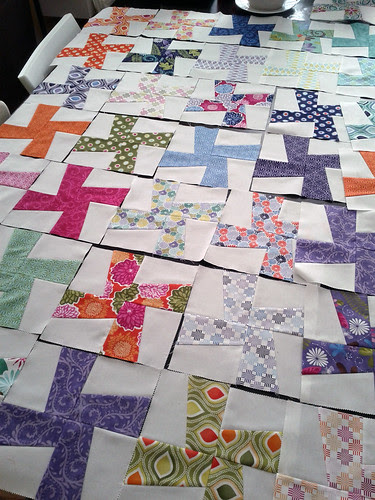 Of course, in a moment of inattentiveness, I messed it up a bit too, and cut 2 of the charms the wrong way, so they whirl in the opposite direction. Doh! 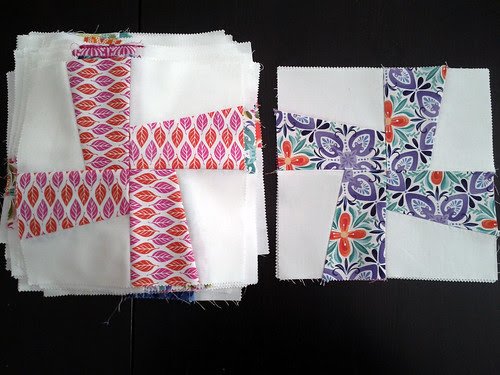 I'm considering using the two wrong-way-round whirligigs in the backing. No real loss, but it shows you what happens when I start cutting before a morning dose of caffeine!
Posted by Marieke at 12:10 PM No comments:

I hope everyone made it through the silly season okay. Ours was a fairly low key affair, and I have to say I enjoyed it that way, no stress and just some quiet enjoyment of the season. The kiddos were with their dad for Christmas this year, and we let them open their presents on the Solstice. Miss Matilda loudly exclaimed with everything that it was just what she wanted, which was pretty funny. I'll have to dig a few pictures off the boyfriend's phone camera of the event.

My big gift to Jeff this year was a Kindle Fire. He had asked for one, and once I knew nobody else was getting it for him, I got one and surprised him with it. Of course this also meant a new Kindle case needed to be sewn: 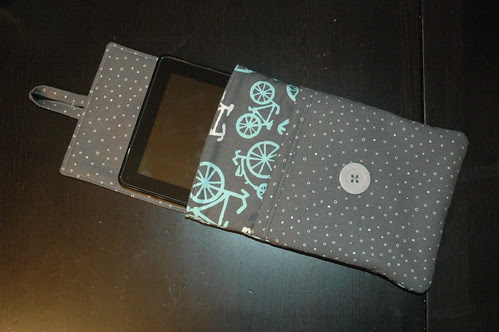 As he rode professionally for a couple of years, bicycles were a natural choice. I had picked up some of the Michael Miller fabric a while back with him in mind, though no real project. Whilst going through some stash fabrics to figure out what to make the case out of, I grabbed that one again, and realized that the piece of Kyla May fabric from her Smirk line matched really well. Voilá!

I did pretty well this Christmas and got some lovely stuff...

Jeff and his dad each got me a quilting book I'd asked for: 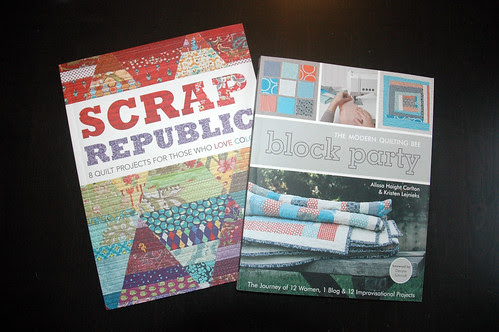 Jeff's mom sent me some money, and unsurprisingly I bought fabric, from the awesome Hawthorne Threads: 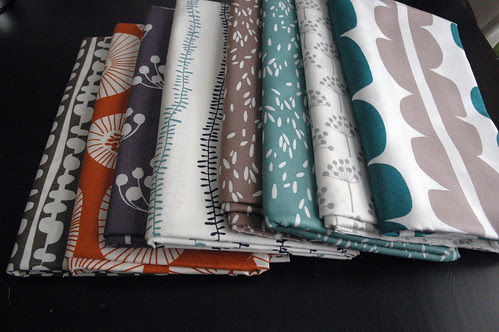 Some Echo by Lotta Jansdotter. They were out of the aqua colored blooms (which I have in the orange also), so that's the only print I had wanted that will have to wait a while. I've seen some amazing uses of the saffron yellow prints too, but I will have to try and resist that temptation!

A FQ bundle of Denyse Schmidt's Hope Valley in the New Day colorway: 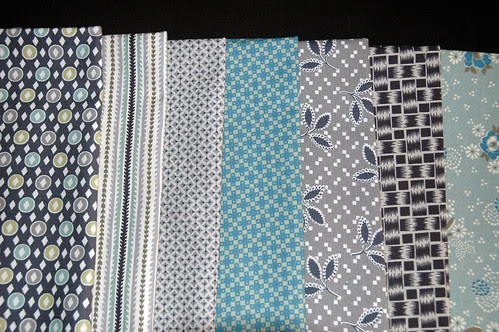 A few prints from the "Cut Out and Keep" and "Across the Pond" collections from Cloud9: 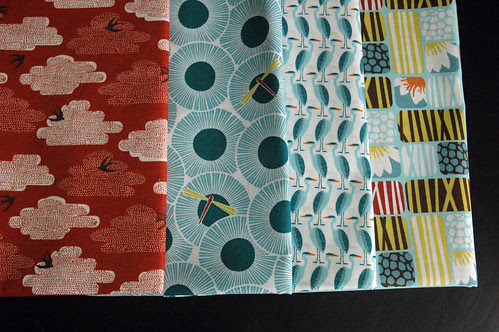 Rendezvous by Khristian A. Howell: 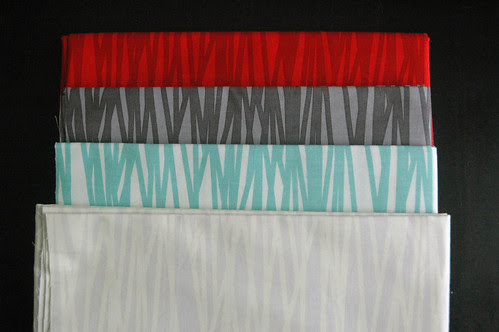 And from Sew Lux on Etsy some Magic Beans/Pez by American Jane for Moda: 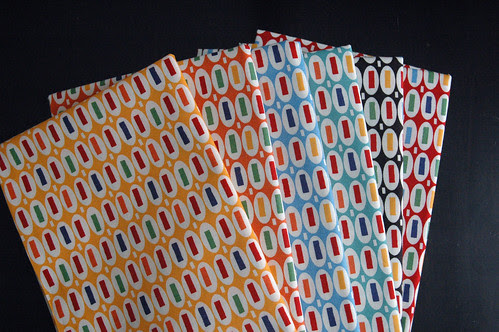 And some Cape Ann, by Liesl Gibson for Moda: 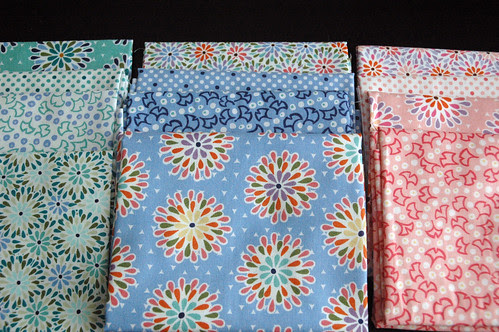 A bit of stash building!

I hope you got some nice spoils this season also!
Posted by Marieke at 10:06 AM No comments: