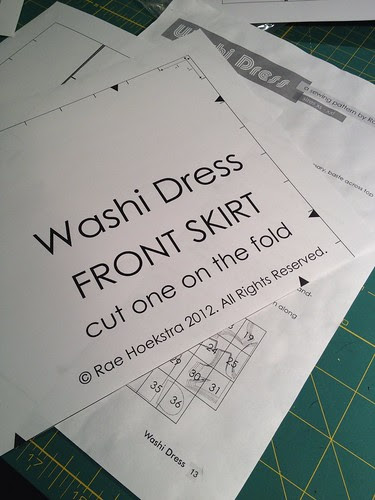 There are a few patterns that float around the blogosphere that you see so often that eventually you just need to try. That's how I ended up making Anna Graham's 241 Tote, my Wiksten Tova dress, and now the famous Washi dress, by Rae Hoekstra.

My first attempt at the Washi was definitely a failure. With three out of four measurements I fall right between M and L, and then an M for the fourth. Per the pattern description, the measurements are supposed to be somewhat generous, so I started off making a muslin in M and put it on. Way too tight!

Take two and I went for L. Still way too tight. This was rather mystifying. My measurements are smaller than the range for L (even measured over the top of a lightly padded bra), and I'm only a B cup. Searching on Google and resource links on Rae's Washi page pointed me to a couple of blogs and resources. The description of issues that might require a Full Bust Adjustment (FBA) certainly sounded like the problems I was having, but being a B cup and using a pattern that was supposed to accommodate B-C cups, it didn't make sense. The next alternative was moving the darts down and adding some length to the bodice. As that was the easier adjustment to make, I was going to attempt that first before the FBA.

While I was in the process of making those adjustments on the pattern and browsing Google to find other people's experiences I came across another blog post, Jen over at Made on the Couch in which Jen was having the same problems I was. She had found out that the problem was the pattern not having been printed at the correct scale. In her case it was 1/8" of an inch difference, which as she rightly pointed out isn't a lot on its own, but makes for a large difference over an entire pattern. I'd had the pattern printed by a friend at his job (I haven't owned a printer in a couple years), and while he'd supposedly printed it at 100%, it may have been the printer that just wasn't accurate. In my case, the difference was 1/16th of an inch. Not quite as big a discrepancy as Jen, but over the width of the front bodice, it adds up to 1 1/4 inch. Finally it made a lot more sense.

Once Jeff goes back to work and has access to the really nice and accurate printer there, I'll have him print the pattern again and will attempt Washi once more. In future I think I may also opt for a paper pattern rather than instant gratification if the option exists.

Posted by Marieke at 9:00 AM No comments: