A continuation from last Wednesday's WIP, it's the Fossil Fern quilt. 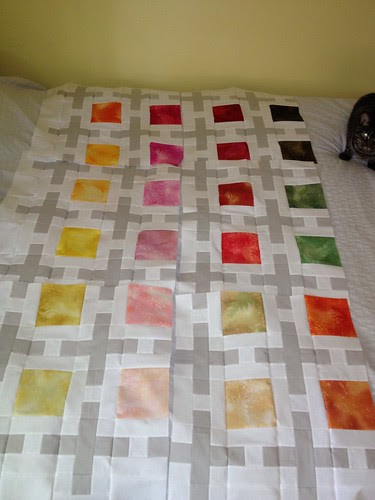 This picture is actually from yesterday, as I was assembling the smaller rows into larger blocks. Taken indoors as we've been having rain the past 2 days, and mostly to show my brother how it was going too. I have a little over a week left to finish piecing this and to assemble the quilt sandwich and quilt both this and one for my step mom and my dad. Eek!

I realized this morning that I'd also pieced some of the green squares into the orange row of one block, and had to re-do that earlier. Besides what's visible in the picture, there'll be a row of blue and purple.

Somehow this quilt is also a little larger than I thought it'd turn out to be. The top looks like it'll be barely a bit wider than my queen sized mattress. It's mostly meant to be a good size snuggle-on-the-couch (and also a thanks-for-letting-us-stay-here-you're-an-awesome-brother) quilt for a guy clocking in at a little over 6 feet though, and I think that'll suffice.

Presently it sits in 6 large pieces waiting for me to press seams and assemble more, but it's time to deal with the evening's dinner, being Heidi Swanson's recipe for Baked Farro Risotto, which is made with the whole grain Farro, and a dish which I end up finding very similar to Lasagna both taste wise and the way the grains remind me a little of pasta.
Posted by Marieke at 4:40 PM No comments: