I'm feeling pretty good about the progress I made on the weekend with my brother's quilt, which only has the hand-stitching on the binding left. A task that's being accomplished in the evenings whilst watching TV.

Then there was the Flip Side top I finished, which now moves towards another stage of completion. Or, rather, the stack of finished quilt tops that need assembling and quilting. With that one, I have the backing fabric, and won't need to agonize over the choices for a pieced back (Ghastlies quilt, I'm looking at you! And my Lotta Jansdotter Echo quilt for that matter.)

Over the past few days, though, I've been working on a Sparkle Punch (Wonky Stars) quilt. I'd cut 3.5" wide strips of about 81 Lizzy House fabrics back in April, and now came time to convert those strips into squares. 80 pairs of 5 squares for whole stars, and then more squares for the partial stars. 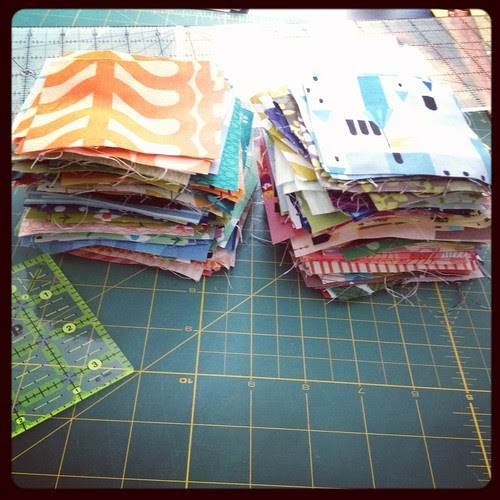 Monday I sliced up some white cotton for the 384 neutral squares I'd need. Then more cutting as most of the patterned squares needed slicing into triangles. Presently I'm sewing the star points. Hopefully by the weekend I can get most of those sewn, trimmed and sewn some more and ready to plan the layout of the entire quilt. 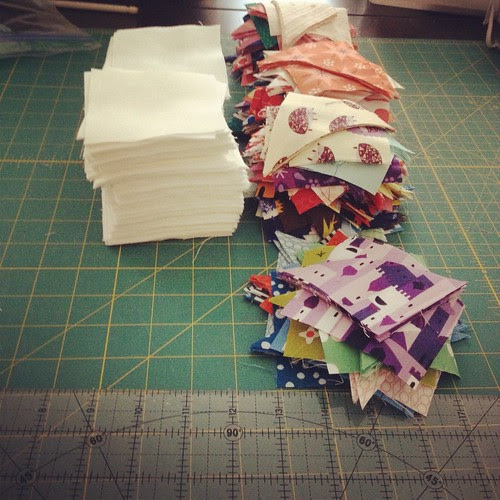 Echo sitting on a project in a more embryonic stage, which will be an adapted Jaybird Quilts' Chopsticks quilt, with Wrenly fabric and Kona solids. This will have to wait a little longer, as I want to clear a few more WIPs off the list, or make some more progress on them first, before I end up with a huge stack of quilt tops and too few finished quilts.

Posted by Marieke at 8:00 AM No comments:

As long as I can remember, I've loved Russian Blue cats with their intense graphite color. I remember being a little kid and seeing them in an ad for some cat food, and that was where the love affair began. I'm not alone in loving them, as it happens Jeff does too. Somehow, a while back, a seed was planted to add a Russian Blue to our existing clowder. We weren't really planning on adding one immediately, as the place we're presently living in isn't the largest. 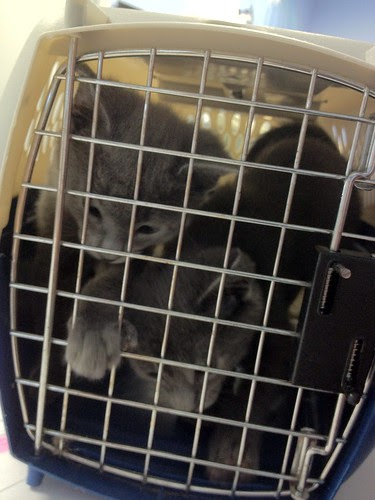 After scouting a variety of Russian Blues in the area, and missing the boat on them too, a lucky find of a petfinder.com listing for a Russian Blue at the local SPCA led us to go have a look. At 2 brothers. As the above picture shows, we didn't just get the one kitten, but both. We just couldn't split up a pair of bonded brothers. 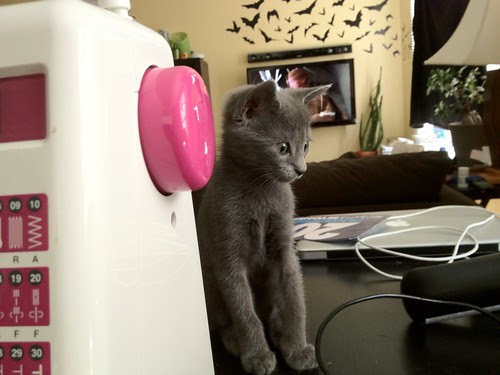 They're super-duper cuddly, in no small part, I imagine, due to the fact that they were rescued and taken to the SPCA when they were about 2 days old and hand-reared. It's been 3 weeks, and they've settled in well with our other 3 cats. I'm also enjoying watching a bonded pair of kittens grow up together. Their interactions are a lot of fun, and it's so cute to find a little sleeping kitten pile every so often. 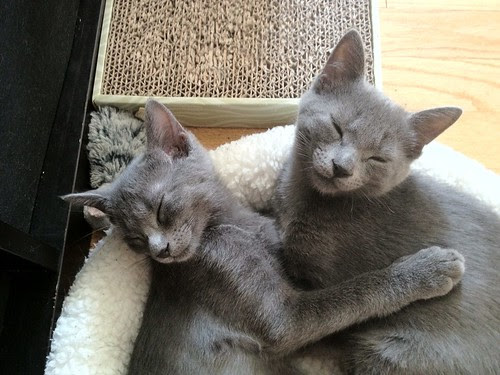 Echo's the darker and skinnier one. Tesla has a more round face, and gets that Russian Blue smile going quite well.

Email ThisBlogThis!Share to TwitterShare to FacebookShare to Pinterest
Labels: cats

It's been much too long since I posted. A trip overseas, to visit family in Holland and England, and a bit of a sewing funk too, conspired against me. Or rather, one was a pretty valid reason but covers only a 2 week period, and the other just left me with nothing much to post about and made me feel guilty about being in the funk and not having anything to write about or show off.

My birthday was May 25th. The middle of the 30s, eep! With my dad and stepmum we planned a trip to Europe to coincide with my birthday. A trip just for Jeff and myself. While grandma and grandpa would have loved to see the kiddos, sometimes it's nice to just get away together. Also my dad and stepmum will be visiting in September and will get to see the wee people then.

I had tried very hard to get my Fossil Fern quilt finished for my youngest brother, but I ran out of time. I'd started quilting random straight lines on it, and ended up unhappy with how the couple I'd sewn looked. Rather than keep going and be dissatisfied about the result, and not having enough time to do it the way I wanted to (while also not having settled exactly on what I wanted to do) I just put it aside and told my brother he'd have to wait a little longer. This was as far as I got just before we left: 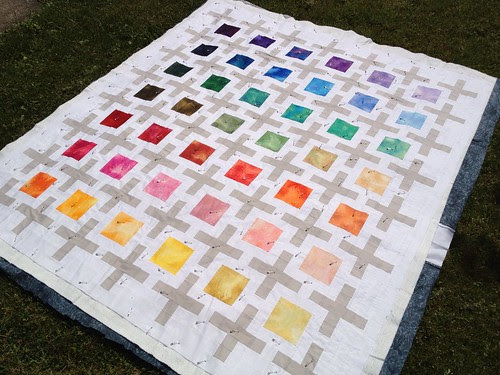 It's pretty big, about 76" x 65". Not quite a bed sized quilt, but as both my brothers are over 6 feet tall, I wanted to give my youngest brother a good sized quilt for him to be able to snuggle under. You know, manly snuggling...

This weekend has been the first weekend in about 6 weeks that I've had to myself (literally, as Jeff's working in Raleigh NC this weekend), and have been able to sew uninterrupted. The kids' dad was away for several weeks, and so they were here the entire time. The summer seems to have zoomed past... summer day camp has come and gone, and now the start of school is almost here!

Yesterday I completed the quilting on my Fossil Fern quilt, made the binding and sewed that on. It just needs hand stitching on the back and it'll be ready for my dad and stepmum to take back with them for my brother.

Then, after getting that quilt out of the way, I pulled out my Flip Side quilt top, one that had given me a headache last year and that I'd put away. In hindsight the issues weren't so terrible, but at the time it had me so frustrated and annoyed that I really needed a mental break from it. I managed to fix the problems and complete it, so I'm very happy about that! 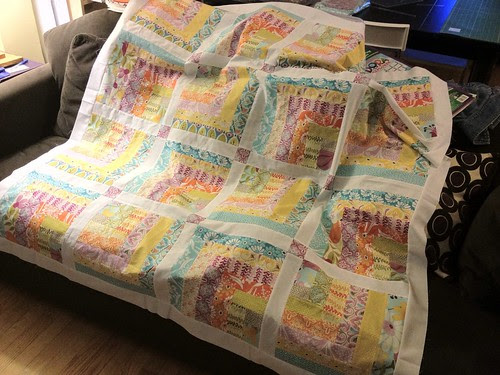 A quick picture on the couch with less than ideal light, before I headed off to bed. The pattern is by Rachel Griffith, and the fabric is Kate Spain's Central Park.

I'm happy to be out of my funk a bit, and glad to have gotten some overdue projects done. How's everyone else doing?