Today is a day without sewing. Mostly this is self-imposed, until tomorrow, when a new sewing machine should arrive!

My current sewing machine is at least about 7 or 8 years old, and was a very cheap and very basic Singer. It still works fine, however, it just isn't very good for me to piece quilts with. Back when I did some basic garment sewing, it did exactly what I needed it to. It has long been a discontinued model, and when I tried looking for a 1/4" foot not long ago (when I started quilting), I struck out. I've held off on buying a walking foot (and also a darning/quilting foot for it), given that I didn't really want to start spending money on purchasing an increasing number of accessories for this particular machine, one that I didn't especially like and wanted to replace.

It has a tendency to be somewhat iffy with the thread tension sometimes, and, lacking a 1/4" piecing foot, in order to get 1/4" seam allowance, I've had to tape painters tape on the plate as a guide. This works somewhat adequately, but isn't always as accurate, and it has become more than aggravating. Due to working on a quilt with many pieced strips and bits (Rachel Griffith's Flipside quilt), having the little inaccuracies pile up will compound into bigger issues. And, I'm just fed up of having to fidget and fudge and have less control over the process than I'd like. I don't think the feed dogs on this machine are ones that can be lowered, which would make quilting at home rather a nuisance too. I'm not sure the feed dogs feed entirely properly sometimes too, as I've had some issues with fabric shifting, even when I pin it to within an inch of its life.

So, a new machine is on its way. I went with a Janome DC2011. For me this is somewhat of an impulse buy, meaning that for once I didn't spend weeks researching and hemming and hawing and "only" took a few hours before deciding. I researched some reviews, but also decided not to look at every single brand and model, because I knew I'd end up driving myself crazy. This one was within my proposed budget, and also did the things I wanted it to. The reviews I found of it were all exceedingly positive, and written by people doing the things with their machine that I was intending to do with mine. Bonus! 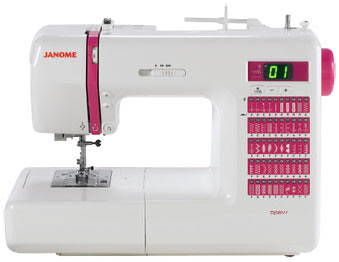 Pink isn't exactly my color (and the only color option), but something I can live with!

It comes with a 1/4" and a walking foot included. I've ordered a darning foot separately, which should be here on Saturday. I'm very excited!
Posted by Marieke at 4:01 PM

Email ThisBlogThis!Share to TwitterShare to FacebookShare to Pinterest
Labels: sewing